The European Union can make a legitimate claim to be a world leader in sustainable or green finance. As evidence of this it is moving from a simple commitment to the Paris goal of zero carbon by 2050 to creating a financial regulatory architecture designed to slam the brakes on climate change. ESG (the investment term for ‘environment, social and governance’ criteria) has become such a powerful force in certain economies that efforts to rebalance regulation around such values have taken on an air of inevitability. Changing the direction of an entire finance system is no small feat in a liberal democracy with freedom at its heart. Experience tells us that those who use the freedom to invest wherever they wish, in pursuit of profit, are often amongst the most vocal advocates of such rights – but also the most resentful of ‘interference’, the setting of a direction which appears to be different to that which the market alone dictates.

And yet the earth does appear to have been moved: markets are responding to the need for behaviour change in respect of climate, though perhaps less so in Japan. Not only has the EU introduced a taxonomy of regulation but other global players are following suit, willingly, in incorporating the values of sustainability into their regimes of financial regulation. In the EU this stance involves a commitment to six environmental objectives: mitigating and adapting to climate change, the sustainable use of water and marine resources, the transition to a circular economy, tackling pollution and the protection and restoration of biodiversity and ecosystems. These clearly reflect UN Sustainable Development Goals, subjected to a filter of materiality.

Tokyo is key to the global response to climate change. As a major global economy, Japan enjoys the responsibility of G7 membership and is home to the world’s third biggest stock market. The lingua franca of the financial centres of Hong Kong and Singapore is English, the dominant language in ESG circles, possibly enabling them to respond more readily to global trends. Hong Kong and Singapore are hearing the EU message, adopting the same climate principles and taking them into the mainstream, as are their neighbours, the Philippines, Indonesia and Vietnam (1). There are opportunities for Japan to make real progress by doing something similar. Indeed, the world is close to a tipping point, where half of all investment is deemed ‘responsible’ in respect of climate and other issues. Although Japan is the third largest funder of the United Nations and the second largest of UNDP it is also the world’s second largest investor in carbon-intensive industries, after China. In 2017 Japan had plans to create no fewer than 42 new coal-fired power plants at home or abroad. Views on carbon regulation in the Japanese money markets are more mixed than in Europe and elsewhere and progress towards net zero requires a greater emphasis.

In 2020 the Asian Development Bank identified a ‘need for the Japanese financial system to mitigate growing climate risks and support the transition of the Japanese economy to a low-carbon, sustainable pathway’ (2), and it launched a Paris Agreement Capital Transition Assessment tool. The Paris Agreement commits its 192 signatories (representing 90 percent of global GDP) to limiting carbon emissions to a level consistent with a rise in global temperatures of only 1.5 degrees (compared to 1990) by 2050. Since 2016 Japan’s government has supported both the Paris goals and the UN’s sustainable development programme more generally. Under Japan’s Presidency of the G20 the work of the Taskforce on Climate-related Financial Disclosures (TCFD) was endorsed in 2018. This was the outcome of work led by Mark Carney, former Governor of the Bank of England. The first global summit on TCFD was organised in Japan by the World Business Council on Sustainable Development, in 2019. The UK introduced the first mandatory reporting code on TCFD in April 2022, with the rest of the G7 (including Japan) due to follow suit over coming months (3).

Of the first one thousand companies to adopt TCFD principles globally, almost a quarter were Japanese. One in every 25 signatories to the United Nations Principles of Responsible Investment (UNPRI) is Japanese. More Japanese companies scored ‘A’ for their climate performance on the CDP rankings in 2019 than from any other country. Perhaps most important of all, Japan is a country that is vulnerable to adverse climate change outcomes – storms and rising sea levels in particular – than almost any other advanced economy of its size, with highly populated metropolitan areas at high risk of flooding. Japan needs climate adaptation and mitigation policies; it needs global warming to be brought under control.

Japan can continue to build on the legacy of Kyoto in 1997, when they hosted the world’s first high level conference on climate change. Successive Japanese governments have had the political understanding, the authority and the opportunity to make the nation a leader in sustainable finance. So why isn’t it happening amongst the larger Japanese industries? Will EU-style climate regulations come forward?

On 11th March 2011 a small earthquake occurred off the island of Honshu. 50 minutes later the resulting tsunami, a wave 15m high, made landfall, hitting the Fukushima nuclear power station. The plant could have coped with the earthquake but not with both phenomena. The resulting loss of power to the emergency generators that kept the fuel rods cool led to the world’s second most impactful nuclear accident ever (in terms of the 154,000 people evacuated). Confidence in the nuclear industry, hitherto the Japanese government’s preferred mode of generating the zero-carbon electricity of the future, was shattered.

This outcome did not help the cause nuclear power within the world of sustainable finance, but nevertheless the positive approach continued.

In 2016 the Japanese Stock Exchange launched its first Sustainability Index. The subsequent growth in ‘green bonds’ as investment vehicles in Japan has been massive, both in numbers (18 in their first 4 years, then 62 in the next two) and in value (see chart). Japan today has the tenth largest green bond market in the world from a standing start in 2014. In 2021 the Bank of Japan started lending money for funding such bonds at zero interest. 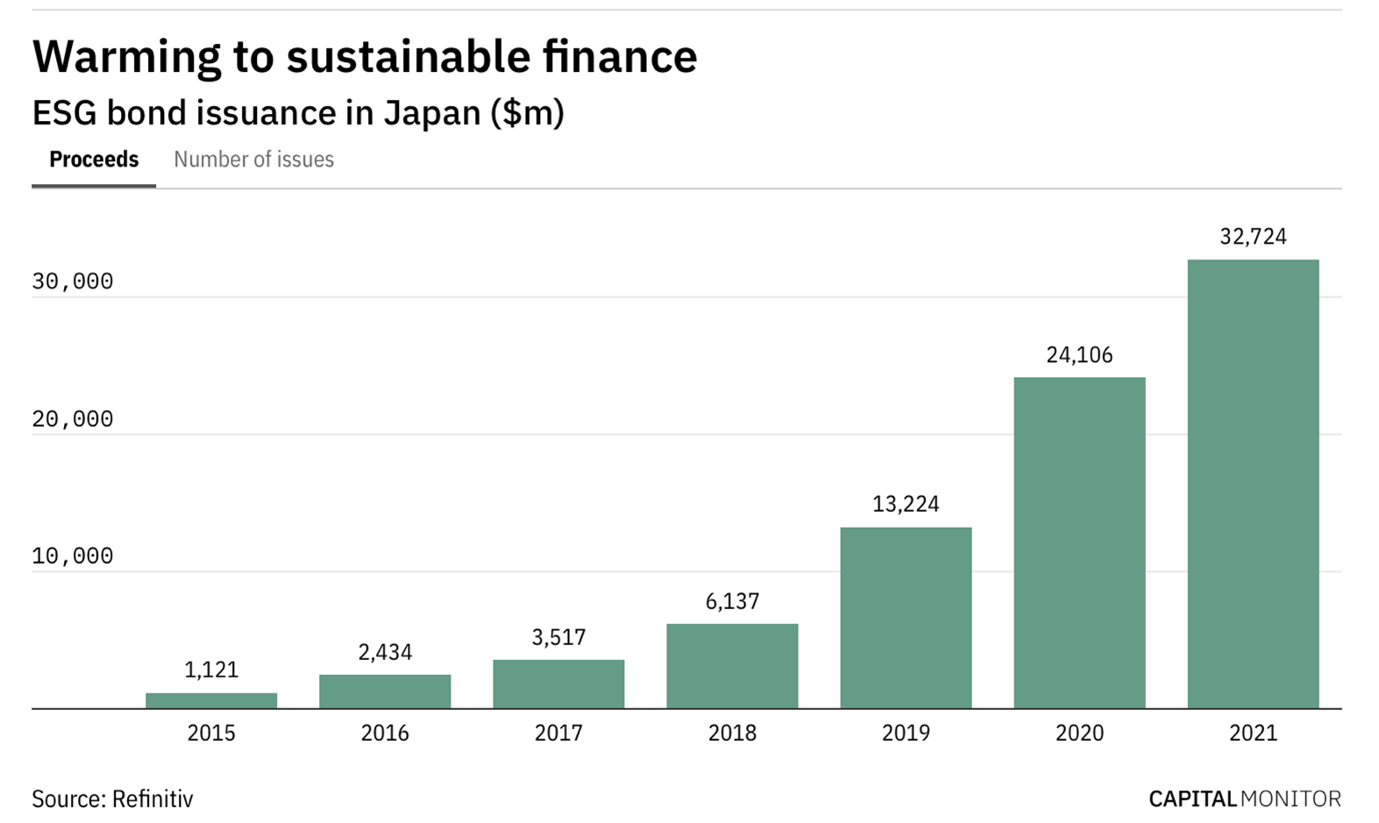 The Financial Services Agency of Japan is exploring ways of tackling a reluctance towards green investment that exists amongst the country’s mainstream institutional investors. It is running a three-year pilot to this end, involving three large banks and three major insurance companies – because Japan relies more on banks as a source of investment and less on the market than is usual in the west (4).

Meanwhile, the renewable energy market in Japan has flat-lined at about 18% of energy production (half of which is hydropower), with future plans likely to involve many small, local initiatives. Japan has set an extremely low carbon trading price, at $4/tonne, when the Paris Protocol suggests it could be ten times higher. (The average is over $10, in California and Australia it is $30, whilst New Zealand and the EU believe that a price of $70 or higher is necessary if the mechanism is to bring about a reduction in carbon emissions). The private Japanese companies that are wedded to producing electricity from coal fear, above all else, it seems, being caught in possession of stranded assets, the power stations themselves. Due to these companies’ reluctance to change, Japan is currently headed on a trajectory consistent with a six degree rise in global warming by 2050, four times higher than the scientists’ recommended limit.

The loss of faith in nuclear power, the investments already committed to future coal and the stranded asset concerns are not the only factors contributing to reticence. Japanese investors are renowned for their innate conservatism, witness shareholders at the giant Sumitomo corporation recently explicitly rejecting a move to a low carbon strategy. If Japan’s carbon intensive industries were more transparent with meaningful data, the task ahead would be clearer and more achievable. The way Japanese companies generally report on their scope 1 and 2 emissions (carbon dioxide or its equivalent from the fuel that they burn and the generation of the electricity they use) is generally weak, obscured by a high dependence on imports. Perhaps one tonne in three of scope 1 and 2 emissions goes unreported, whilst scope 3 reporting (of the lifetime carbon footprint of their products) is not yet widespread.

In seeking to lead the way on climate-related non-financial disclosures the Bank of Japan has announced its own disclosure plans (4) and this is clearly a matter which the Japanese Financial Services Agency is also prioritising.

Three major organisations represent business in Japan of which the most powerful, Keidenran, is the voice of the largest corporations. All three recognise the need for action on climate change but they question the use of legislation to tackle global warming, preferring (as they see it) ‘carrots’ rather than ‘sticks’. None is more vocal than Keidenran on the issue; they have even lobbied the EU, attempting to persuade them to abandon their pursuit of a global ‘carbon taxonomy’. Keidenran’s arguments in favour of laissez-faire were summarised in a concise, four-page publication in 2019 (6). A global approach to climate change should not be regarded as a threat to cultural norms or financial traditions.

Japan’s leadership in the green bonds market is exemplary but the approach needs to go mainstream and involve the larger investors. This is recognised by Vice Minister Hirose, speaking at the OECD in October 2021, in saying that becoming carbon neutral will require substantially spurring on structural transitions in the energy and industry sectors, and creating innovation through bold investment by private companies (7).

In line with this analysis, Tokyo could look at developing the market in brown bonds (also called ‘transition bonds’). Brown bonds are an integral part of a low carbon strategy; the movement they represent is a step in the right direction. These bonds are a relatively new asset class for investors, particularly focused at helping the ‘brown’ industries, heavy users of energy such as oil, gas, steel and other construction materials, along with chemicals and paper/pulp, to make first steps along the low carbon route (8). All these industries feature heavily in the Japanese economy. No stock market has yet really focused on brown bonds and made them their own unique selling point, so this is an opportunity for Japan to lead the world.