What Does 'Global Britain' mean for Asia?

When Britain officially ‘brexited’ from the European Union (EU), in January 2021, it did so amidst a fanfare of promises of freedom and independence. The validity of this pledge was, to say the least, subject to verification at that time. A UK government web site described ‘Global Britain’ as:

‘…a new chapter in our history. We will be open to the world, free to tread our own path, blessed with a global network of friends and partners, and with the opportunity to forge new and deeper relationships.’ (1)

Since embarking on the Brexit process the United Kingdom has negotiated no fewer than 63 trade agreements with countries around the world. Although this sounds a lot, the result of negotiators working eight days a week, in practice the bulk of them simply re-establish the status quo ante. They restore to the post-Brexit vacuum a trade situation which is generally neither more nor less advantageous to the parties than that which applied when Britain was an EU member and acting under its auspices. One of the biggest agreements is that with Japan, already UK’s 11th largest trading partner, which has been described by some as a ‘missed opportunity’. This is because it will boost bilateral trade by a mere 0.07 percent (2). Heralding the claim that the South Korean agreement would boost trade by 9 percent per annum it was clearly not convenient to remind readers that bilateral trade had previously been growing at a rate of 12 percent (3).

Indeed, the four significant post-Brexit bilateral trade agreements already signed between UK and Asian states are not exactly brimming over with ambition: the deal with Japan is worth £24.2Bn, the same level as bilateral trade in the year ending 2021Q2. The deal with South Korea expects to yield £13Bn compared to £12.5Bn and that with Vietnam £5.2Bn compared to £4.8Bn. Of these four, Singapore (£17.8Bn compared to £14.8Bn) shows the most significant rise (4). The world’s five fastest growing economies include four in Asia (India, Bangladesh, Vietnam and Cambodia) yet Britain so far has a deal with only one of these (5).

Few western countries have a history of engagement with Asia which is as long and complex as that of Britain, though not all of it is recalled with pride. However, now that Britain has shed the Eurocentric focus that has guided its national economy for the last 50 years and more, is there a re-emerging post-colonial mood to engage with Asia? There have been literally hundreds of years of trade – with India, China and the south seas, including the ‘discovery’ of Pacific communities – that should perhaps imbue Britain with obligations to Asian states; and yet there is little evidence, as yet, that it was necessary to leave the EU in order to boost trade with the Asian continent.

Britain has initiated the process of joining one of the major trading alliances of the east, CPTPP (the Comprehensive and Progressive Agreement for Trans-Pacific Partnership). This is a free trade area representing an eighth of the world economy and focused on the countries of the Pacific rim, Asian and otherwise, with minimal tariffs or trade barriers. British ministers, so recently released from one ‘single market’, cite their request for membership of another, smaller one, as evidence of ‘global Britain’ in action. Of the 11 current CPTPP members, Britain already has bilateral agreements with 7 (shortly to be 8, as New Zealand is due to ratify imminently). Joining is a slow, diplomatic process – admission requires the unanimous agreement of all pre-existing partners; President Trump withdrew the USA from its predecessor treaty, the TPP, in 2017.

China and Taiwan have also expressed an interest in joining CPTPP, though the treaty’s current partners are probably not minded to approve China’s bid, which would be seen as introducing a fox into the henhouse. New members are admitted only by unanimous vote, so China’s admission is probably a non-starter, and it is close to certain that were either China or Taiwan be admitted first it would veto the application of the other.

The newly formed RCEP (the Regional Comprehensive Economic Partnership) appears to duplicate much of the purpose of CPTPP although it is less even handed, being more pro-Asia, and significantly bigger, involving 30 percent of the global economy (due to the presence of China and South Korea). RCEP is bigger than the European Union and (brexiteers would argue) less constraining, but Britain is not (yet) joining RCEP. Every one of the ten ASEAN (Association of Southeast Asian Nations) countries is already a member. (6) (7) 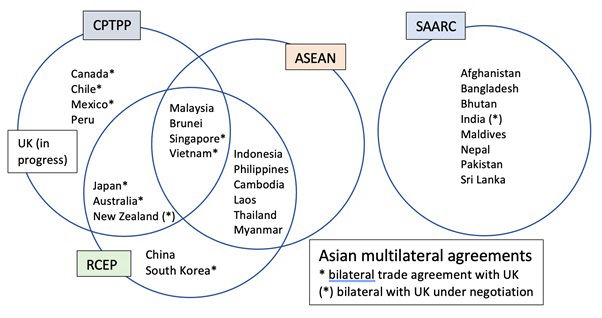 The figure illustrates the inter-relationship between membership of the CPTPP, ASEAN, RCEP and SAARC (the South Asian Association for Regional Cooperation), which does not claim to be a trade organisation but instead focuses on ‘non-controversial’ political issues pertinent to the subcontinent. SAARC represents only 4 percent of the global economy but 21 percent of the world’s population; in 2004 its members created the South Asian Free Trade Area (SAFTA). Myanmar has observer status at SAARC, and both it and China are interested in becoming full members. Russia and Turkey seek observer status and the United Kingdom is one of a small number of non-Asian states who have expressed interest in joining, further down the line.

Within SAARC/SAFTA, India is currently a very big fish in a relatively small pond, which means that it is undoubtedly not making the most of the multilateral trade agreements that exist around the globe. It is currently thought that India will not be joining UK in applying for CPTTP membership, finding its rules too restrictive, yet it needs to assert itself more forcefully in the global economy (8). This explains why it is so keen to negotiate bilateral arrangements with other relatively large economies such as UK and Australia.

On the social and political front, the United Kingdom is a longstanding member of UNESCAP, the United Nations Economic and Social Commission for Asia and the Pacific, whose brief is to stimulate economic activity both within the Asia Pacific region and between the region and the rest of the world. Three of its 53 full members (UK, Netherlands and France) are European, with colonial history in the region, so clearly EU membership created no barriers to engagement on this front. The United States is also a member of UNESCAP, and nine smaller Pacific communities (including Hong Kong and Macao) have associate membership.

In the summer of 2021, the UK Government published the defence, development and security aspirations of ‘global Britain’ (1). This document rightly stresses the challenges that the twenty-first century presents, of climate change, human rights, cyber security and the loss of biodiversity; of mass migration and the need to ‘share prosperity through trade and investment’. It is an uncontroversial list of ‘motherhood and apple pie’ issues and, if anything, it raises the question once again: ‘Why was it necessary to leave the EU to do all this?’

The question is now, of course, academic. Britain has left the EU and will not be rejoining the European mainstream in the foreseeable future. The ‘global’ role is the only feasible one available to the country other than relative, ‘little England’ isolation. Britain is the third ranked ‘soft power’ in the world and an acknowledged global leader in areas like international development, cybersecurity, science and technology. It is also the second highest spender on defence in NATO (in GDP terms): it has always punched above its weight. Asia is the most populous continent with a rapidly growing economy and burgeoning aspirations and cannot be ignored by Britain, the EU or the wider world.

In that same report Prime Minister Johnson further displays his multilateral credentials by recalling his speech to the United Nations on climate change, taking credit for the COP26 climate conference in Glasgow in 2021. Issues like this, should Britain continue to take a leading role in coordination, will require continuing and enhanced global collaboration. Asia has a growing carbon footprint, historically associated with increasing prosperity; breaking that carbon link without compromising the standard of living of aspirational communities is a challenge to which the world has yet to find a workable and acceptable solution.

So, whilst there is no doubt that Britain has both a global past and a global future, there is no evidence that the country’s ability to discharge this role was significantly impaired by its membership of the European Union. Putting that issue to one side, despite its massive accumulation of bilateral trade agreements, its CPTPP ambitions and bland statements of intent, a year on from Brexit it is still too early to tell how UK’s impact on Asia of the recent past will differ from that of the future, qualitatively or quantitatively.

The evidence so far is that post-Brexit Britain is working very hard in order to stand still in its trade relations with Asia.